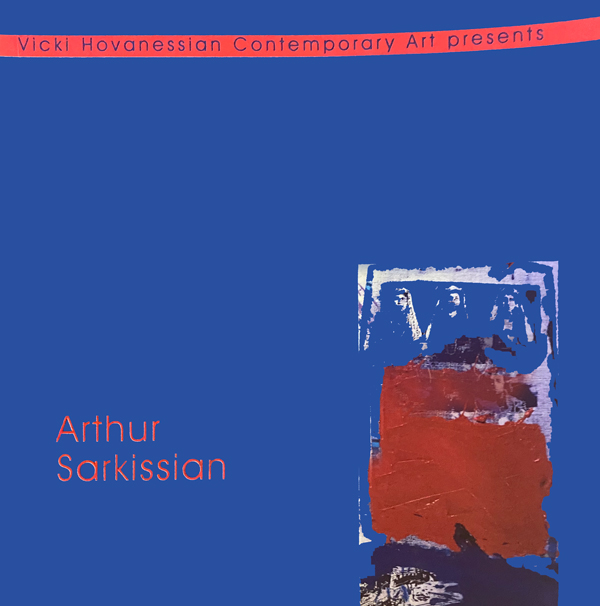 If the wall obstructs the eye, confining the scene, a picture hanging on the same wall provides a window for the observer. This abstract surface, like a window, opens to reveal the inner landscape that lies beyond. The pictures of Arthur Sarkissian examine the architectonic aspects of both wall and window. They appear to make allusion to spatial relationships. In fact, what is open or closed, emerging or indefinite, what is inside or outside the wall, is not, after all, a natural space, a landscape, or a distant perspective.

These pictures enable the eye to glide, fix, and return to a point on the canvas, confirming the materialization of time. This materialized time is the artist’s target, as well as its structures—the present and the past.In this apparently immutable present, in its spatial and temporal birthplace, is a painting that may be touched like a wall, human skin, or the stem of a plant. It is the material, and its manifestations include the rough exposed canvas, the fixed template of paint, the oozing glides of color, and the brush strokes that fix the boundaries of the work. It is this substantive present that impedes and screens time itself and makes us forget its provisional nature.In Arthur Sarkissian’s case, to uncover this disposition of time means to tear apart the surface of the present, to discover cracks and holes that let in the light of new possibilities.

What is revealed is the total pictorial heritage of the past, from specimens of applied art to interiors and exteriors of diverse architectural styles; from seals, insignia, manuscripts and embroidery to the masterpieces of Renaissance and Baroque art.The present, with its ever-changing disposition, with its flair for objectification of the past, is nothing but a ship sailing in the ocean of history. Contemporary art is, finally, a reiteration of this historical present—afloat in the sea of culture. The artist serves as captain here, and the observer is his curious passenger.

In this present, the division between the artist and the connoisseur is more and more conditional. Now their roles imply resemblance more than difference, since they are defined not by status but by their relation to others. More significantly, they share the danger of failing to distinguish the present from the past, and of getting lost, vanishing in other "time zones."Arthur Sarkissian has identified a way to tackle this threat. He adopts an old tactic of gamesmanship.
According to this strategy, the work of art is conceived as ritual a system of signs through which the mechanical and intangible nature of the present is obliterated through repetition. Submerging himself in the art of the past, the artist "visits the museum" by emphasising, in his work, the elements of artificiality, inconsistency, and the ceremonial that characterise actual visits to real museums. Through the material nature of painting, he confirms the authenticity of the past while rejecting its illusory pretensions.

The traces of seals left here and there are mere signs, documenting the ceremony of repetition and attendance.However, these traces are ambiguous. While registering the artist’s presence, they suggest other aspects of the artist and his role. As acts of christening, they evoke a spiritual service, referencing the past, as well as our forgetfulness. They underscore, in this way, the importance of vigilance and delight. Central as this aspect of the artist’s work may be, it is not the primary issue, for the strategy of this game, as well as this art, is aimed at controlling and submitting, knowing and making known, enduring what is transitory and making it enduring. Its power is in its infinite ability to begin anew and reach a new conclusion. However, the source of this vital power is not human.The artist’s passion for life bursts out in a vigorous act of renewal, celebrating the life bestowed on him as a singular reward and a superior challenge.

As I got out from taxi , I was greeted by the welcoming smile of Arthur Sarkissian. We walked trough a tunnel which opened into a village with no paved streets. Following him up and down uneven pathways, then downstairs into his studio, I was overwhelmed by number of paintings that were stacked up against each other. As each canvas was uncovered, the studio took ona new life, filled with vibrant color, liberating dialogue, an atmosphere which took flight.
As I looked round, I saw colourful brush strokes, paint applied spatula, silk screened towns, churches, architectural details, letters written to loved ones, and photographs of families , village leaders , and home makers from generations past. All this images point to the past and bridge a gap between then and now, past and present: the family photograph from eighty ears ago juxtaposed with the bright, vivid colors and metaphors of our present times. His process includes layes, silk screen, brush strokes, more color; all applied together until he feels satisfied with his creation. This process parallels with the layes of genertions, of times and cultures past. A world based on past.
Arthurs works are very personal, yet very very culturally and historically saturated. They are powerful, liberating; they present joie de vivre. Each creation tells a personal and universal story. Allow yourself to explore and discover. 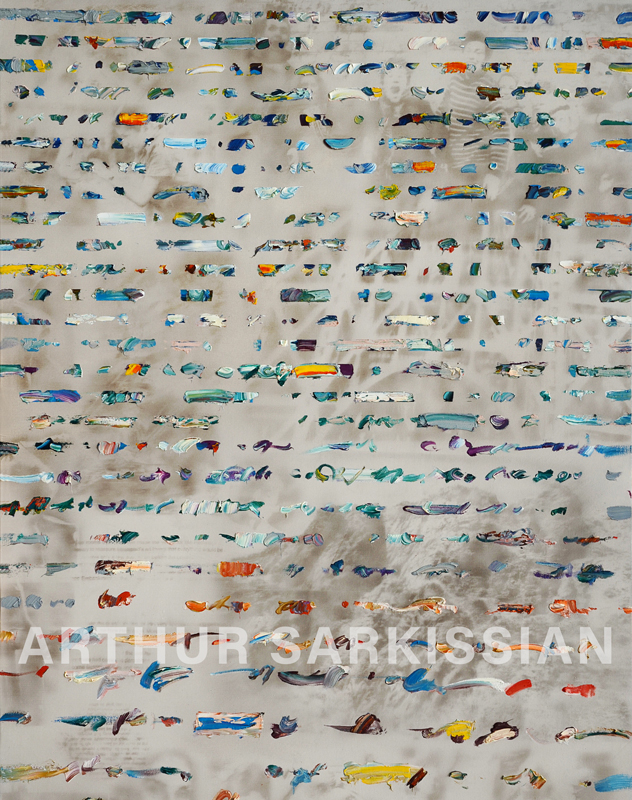 What is “felt” – embodied in Sarkissian’s painterly gestures and rich coloration – maintains its integrity, and what is “known” – concretized in the images Sarkissian finds in mass media and transfers to the heart of his artworks – continues to evince its source in widely disseminated formats such as newspapers and books. But despite this obvious polarity, Sarkissian effects a remarkably easy and unstrained flow between the felt and the known, between raw brushstroke and transferred image.
Petr Frank 2006 , LA

No items found.
Product is not available in this quantity.